Posted at 22:23h in inspiration by Elaine Bolt Ceramics

Last week I visited Kim Bagley‘s solo show ‘Africa and the West’ at the James Hockey gallery in Farnham. Kim has been working towards a PhD in Ceramics at the University of the Creative Arts in Farnham and this is her major exhibition. Kim started her PhD studies at the same time as I started studying for my MA in Ceramics. We shared workshop spaces at UCA for two years which undoubtedly had a great influence on me and my work. I learned a lot form her use of clay bodies, paperclay, reduction firing; but her enthusiastic approach to experimenting with clay and with ideas, was also infectious.

Kim Bagley – Africa and the West

The show is described as “an exploration of the artist’s own African and South African identities” where the artist uses her ceramic pieces as “a metaphor and a starting point for examining questions of identity and representation”. You can read a little more about the underlying themes on the UCA website.

The main exhibition area is filled with ‘tents’ (each around two feet high) made from porcelain and terracotta paperclay. The forms represent extermination tents – tarpaulins used in South Africa to cover entire houses for fumigation against wood boring insects. The pieces here are in places marked with text, sometimes obscured, playing with the wording used on the tarpaulins themselves, but also with the theme of identity, labelling, tagging.

Several of these large pieces are grouped on the gallery floor, whilst others are suspended from the ceiling and appear to float upwards and away. To me they appeared like a swarm, both on the ground and in the air, captured whilst in movement. Other observers imagined they were placed as if on some distant hills. However, I couldn’t escape the sense that the fumigation tents had themselves been transformed into moving creatures.

The pieces suspended above the ground made fascinating reflections on the floor in different lights. Light also played a part with traces of text and markings showing through the ‘skin’ of porcelain. The pieces on the ground hinted at animal forms in other ways, not least through their rib-like structures. For these pieces, the tents enveloped a scaffolding – a skeleton that made its presence known through the fabric of the clay and at the base. Some of them even looked like they might scuttle away at any moment on their many legs. Perhaps I’m anthropomorphising too much here, but animal themed undertones infuse the work and the scale of the pieces invite the viewer to relate to them. 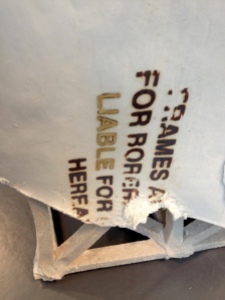 There are three main elements of the exhibition and beyond the ‘tents’ there are other significant pieces on show. There are two hanging pieces which are formed from hundreds of paperclay pieces strung together with silk thread. Each element is in the shape of ear tags commonly used to identify cattle. The pieces, when viewed from a distance take on the appearance of a curtain, but with the hint of a cow hide. 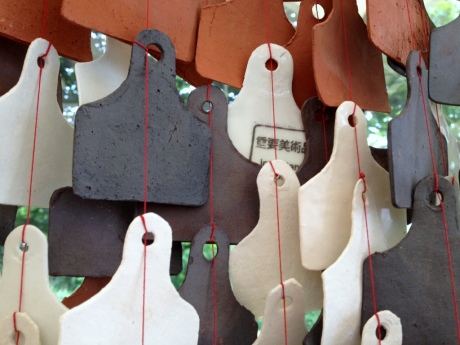 The centre piece in the gallery entrance uses the same palate of raw, unglazed clay colours, mixing porcelain, terracotta, stoneware. This piece represents a herd of cattle, each five or six centimetres high but, like the tags, forming a whole piece when grouped together. There is a sense of awe felt when looking down on them, as if from a hot air balloon perhaps, and the placing of the piece close to the ground forces this perspective. But the feeling changes when you get right up close to them and on their level. The notion alters to wondering if they might stampede. I’m the lucky owner of a couple of these animals. They’re beautiful in their own right, but there’s great power in the herd. 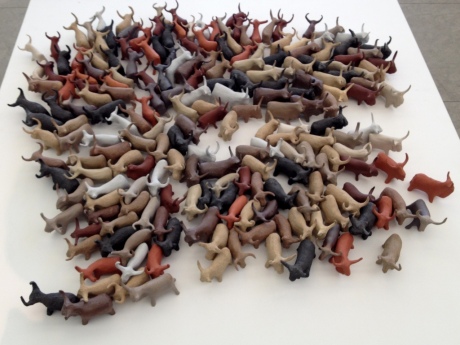 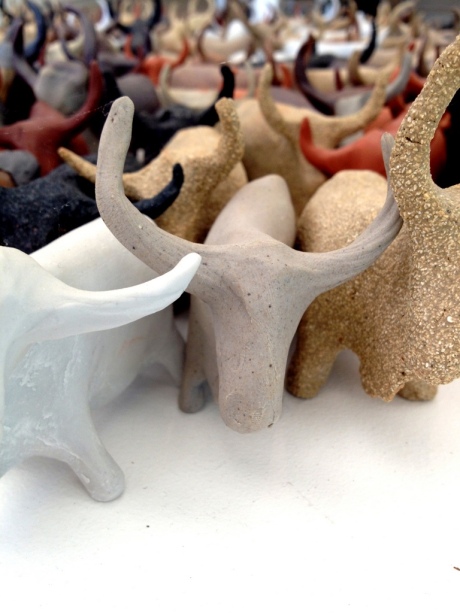