Posted at 19:10h in Current work by Elaine Bolt Ceramics 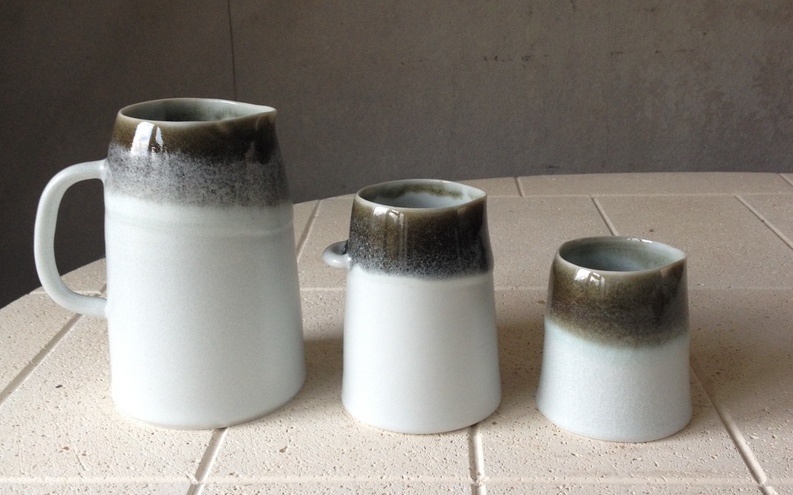 My firings use a gas kiln, in reduction, and such firings can always be a little unpredictable. I’ve become used to the subtle changes that occur from firing to firing and from shelf to shelf depending on the glaze mix, the temperature differences, the amount of reduction, the weather and even the whims of the kiln goddess. My latest firings have brought this to my attention a little more than usual with a set of unexpected outcomes.

My pale green glaze (seen below left), often clear with very little crackle is now a crackle glaze that appears softer and more muted this time (below right). I like it but it’s different. To achieve this finish I applied the glaze a little more thickly and fired it a little lower down in the kiln. Only two seconds longer in the glaze and 10 degrees of temperature difference appears to be all that was needed produce this slightly altered surface.

With some of my pieces I dip the rim in an iron rich glaze underneath a frosty white glaze. The two jug rims above have had the same glazes applied, the one on left from a previous firing. This time the pieces had a couple of seconds longer dip in the iron glaze tub, which is what, I think, changed the lichen green rim (left) to a coffee brown with frosting (right). Again, I love the result, but it’s just so different. The frosty white glaze, by the way, turns a shiny celadon if I move it just one shelf up. So I have to consider the effects of positioning in the kiln as well as the thickness of the glaze.

Positioning in a gas kiln is a subtle art. In the same firing, the dark mat bottles above left were next to each other at the back of the kiln, but one has come out with a blush on the side. There must have been a patch in the kiln just there, where there was a weaker reduction. Happily it appeared just where my potter’s mark was placed. It looks almost intentional, but I couldn’t have made it do that if I tried. One of my jugs, however, was too close to the gas flame from the burner, creating a, not so subtle, flash of unreduced clay body at the side. Interestingly the glaze on the rim of the piece, just above it seems unaffected. Re-firing might not save this one, so it may just end up in my own motley collection of pots for the kitchen.

Other subtle changes that have been taking place lately have occurred on the Making Ground project that I’m working on with basket maker Annemarie O’Sullivan. We’ve been collecting samples of local clay at a former brickworks in East Sussex. Some of the clay appears blue/grey when initially dug up, but appears to turn a buff/yellow colour when exposed to the air. I don’t know much about this phenomenon but assume its something to do with the iron in the clay reacting with the air. The samples we’ve tested all seem quite different ranging from firm to smooth to crumbly and dark brown to light yellow. But firing at bisque temperature has evened out some of the differences. Now you must study them closely to appreciate their variations. Find out more about the project on the Making Ground blog.